5 Things to know about Fibre. 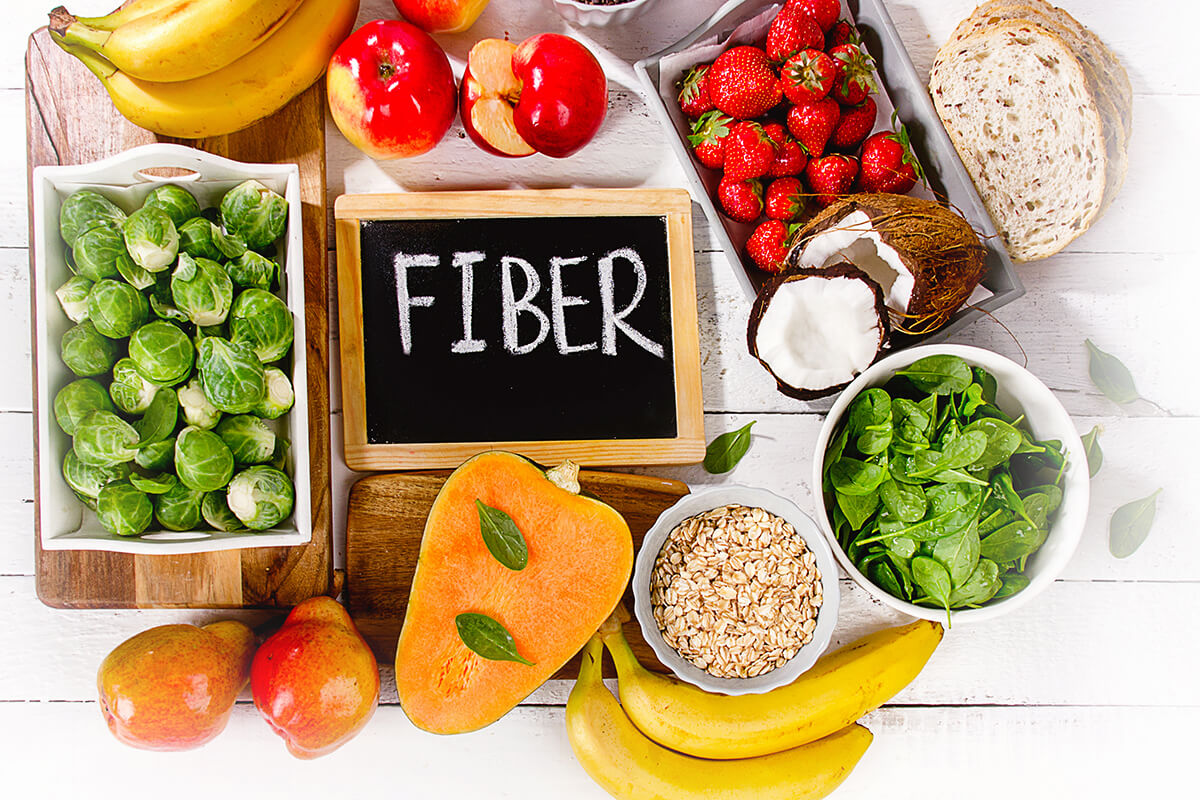 5 Things You Need To Know About Fibre

With new research emerging all the time, it’s no wonder the majority of the general public is confused about most things regarding nutrition – fibre being one them. We have heard that it is important for our health, but what exactly does that mean? And what even is fibre?

Before you go out and buy a bottle of Metamucil, let’s break down exactly what fibre is (pun intended). Fibre is the indigestible parts of fruit, vegetables and grains which cannot be broken down or digested by the body. This does sound as though fibre shouldn’t be eaten if it can’t be digested, but read on to find out how extremely beneficial adequate fibre intake is for optimal health.

There are two types of fibre:
INSOLUBLE: Insoluble fibre cannot be dissolved in water, and therefore passes through the digestive tract basically unchanged. As it does this, it cleans the digestive system and adds bulk to the stool. Sources can include: nuts, seeds, wheat bran and the skins of fruit and vegetables.
SOLUBLE: Soluble fibre absorbs water into the stool as it passes through the digestive system, making it softer and easier to pass; thus, reducing the chances of constipation. Sources can include: some fruit and vegetables, oats, psyllium husk, chia seeds and barley.

So what happens when you eat fibre?

ONE: YOU FEEL FULLER FOR LONGER
Because soluble fibre absorbs water as it moves through the digestive tract, it actually slows down the digestive process meaning you stay fuller for longer, reducing mindless snacking and grabbing food that isn’t good for you because you’re hungry straight after lunch. How good!

TWO: BLOOD SUGAR LEVELS ARE STABILISED
Due to the low-glycemic index of fibre-rich foods, and the fact that they are digested slowly, means that they do not cause a spike in blood sugar levels when being digested, but rather, sugar is released into the bloodstream slowly as well. Stable blood sugar levels equals sustained energy and concentration levels throughout the day. Think about it this way: eating a chocolate bar, which is categorised as a high GI food, is digested quickly and sugar is released into the bloodstream quickly. As a result, your energy and concentration peaks very quickly after eating the chocolate, but is then also quickly followed by a drastic ‘low’, where energy is terribly lacking. Compare that to eating a bowl of oats topped with blueberries and chia seeds. I reckon you’d be feeling pretty full for a long time after that nutritious breakfast!

THREE: GUT FLORA (BACTERIA) ARE FED
Soluble fibre particularly acts as a wonderful source of prebiotics which feed the good bacteria in your intestinal lining. If you didn’t know already, the walls of your intestines are lined with good bacteria (also known as probiotics) which are absolutely essential for the digestion and absorption of nutrients. If your gut bacteria is depleted or overgrown with the wrong type, it can lead to food intolerances and allergies, leaky gut syndrome, malabsorption, constipation or diarrhoea – so feeding these good guys is absolutely imperative, and that’s where soluble fibre comes in!

FOUR: BOWEL MOTIONS ARE REGULATED
Regular bowel movements essentially means that your bowel motions are frequent, well formed and easy to pass. Both types of fibre are important for regulating bowel movements, as insoluble fibre adds bulk to the stool, thereby increasing faecal urgency (this also helps with diarrhoea as adding bulk to the stool allows it to be formed again); and soluble fibre softens your stool and allows your gut bacteria to digest your food properly, meaning it isn’t isn’t sitting in your intestines undigested and causing constipation.

FIVE: PREVENTION OF NUMEROUS DISEASES
As alluded to in the previous paragraph, there is the potential for great danger when our digestive systems are not working as they should. If food is not digested properly and remains in the digestive tract longer than it should, the body begins to reabsorb the toxins that the kidneys and liver have tried to remove. Inflammation can also occur if there as digestive issues, and inflammation is usually the beginning of disease (such as bowel cancer etc.) Leaky gut can also occur which is when food particles begin to pass through the walls of the intestine when they shouldn’t, again, causing inflammation and malabsorption (malabsorption then usually leads to a myriad of nutrient deficiencies).

Now that you know all of that, we expect to see you sliding that apple into your bag to have with lunch, or swapping your white breads and pastas to the wholemeal version!